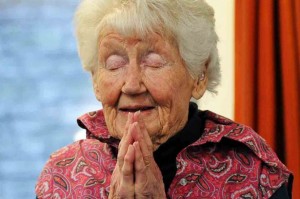 My grandma has been enjoying a media whirl, featured in The Dunfermline Press, Courier, Sun, Daily Record, The Scotsman and on Reporting Scotland for being the world’s oldest yoga teacher.

Here’s what she had to say
Her interview with Reporting Scotland
http://video.stv.tv/bc/news-130118-g-pensioner/?redirect=no

Here’s the story from The Scotsman

The holder of the world’s oldest yoga teacher crown is about to be toppled – by a Scot who is just two years away from celebrating her 100th birthday.

Connie Dennison is set to take the Guinness World Records title from a Canadian pensioner, after finding out she is two years older than her fellow yogini.

It has taken many months for her two daughters, five grandchildren, ten great-grandchildren and many devotees of her teaching to convince Mrs Dennison to claim her rightful title.

They told how Mrs Dennison, 98, had agreed to them getting in touch with the Guinness book only after being persuaded by pupils at the weekly class she has held at the same Dunfermline church for 40 years.

It comes a year after  Canadian Ida Herbert, 96, was named as the oldest yoga teacher in the world.

Mrs Dennison’s granddaughter Susannah Dean, 43, said she was pleased her grandmother was finally interested in applying for the title.

She said: “She’s always said no in the past, but I think she’s enjoying herself just now, and now we know that she is definitely the oldest, it’s wonderful.

“What an achievement, and what a wonderful story she has to tell. She is a strong, powerful and vibrant woman and has always been a great inspiration to me.”

Mrs Dennison has handed down her yoga techniques to three generations of her family and says the ancient exercise regime – which originated in India and works both the body and the mind – has kept her young at heart. “I’m quite sure that I’d be in a wheelchair if I didn’t have yoga,” she said. “My legs have been stronger since I started and it has helped me and my family.”

She started practising yoga when she was living in Melbourne, Australia, when she was in her 40s. At that time, yoga was almost unheard of in the UK.

The former hairdresser, who drove trucks across the UK delivering food supplies during the Second World War, has outlived her two sisters and brother. Her husband, Tom, a retired minister, passed away 20 years ago.

Her pupils include more than a dozen women who attend the weekly sessions at St Leonard’s Church in Dunfermline.

Marion Slaughter has been attending Mrs Dennison’s classes for about 20 years. She said: “I love the class; it keeps you moving. Connie is the most fabulous person I’ve ever come across.

“Anytime I feel down, I think about what she would do, and I bounce back. She’s brilliant.”

Another class member, Janet Bolton, said: “She’s marvellous, and we thoroughly enjoy the class. It keeps you fit but isn’t too strenuous.”

Mrs Dennison has always started her classes at 10am sharp, beginning with relaxation techniques. During her 60-minute class, she takes her group through a series of moves, including sun salutes, tree pose and child’s pose. Still flexible thanks to a lifetime of regular practice, she is capable of more advanced poses, in which she extends her legs over her head.

Sophia Henderson, 88, another pupil, said: “We would love Connie to be in the Guinness World Records, it would be wonderful for her. I’m sure we would also be inundated with requests to join our class.”

A spokeswoman said: “Guinness World Records is extremely happy to hear about Mrs Dennison’s achievement. Mrs Dennison and her family can make a claim if they wish this achievement to be verified by our record management team.”