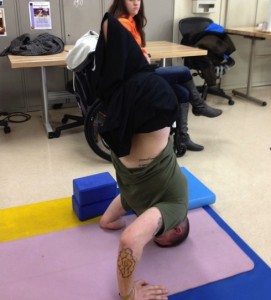 It is possible to be competitive in yoga, although not helpful: competitive with others and with yourself. Ultimately yoga is bring in the moment, accepting who you and celebrating life. Here is some brilliant inspiration.

This is a war vertran who has lost his legs and one hand in headstand. He is taught by instructor Daniel Hickman

“I’ve taught several combat veteran amputees who are below-knee amputations or above-knee amputations, so there’s a lot of stuff we can do on the arms. But then, every once in a while, someone will walk in and they don’t have a hand. So there might be people without feet and an individual without a hand,” Hickman says.

Hickman who’s been teaching yoga classes at Walter Reed for the past 6 years knows modifying and checking in with the students every day to see how they’re doing is important, as well as keeping the yoga open and social.

For the vetrans, it’s less about getting the poses and more about feeling. Marine Staff Sgt. James Sides, 30, had his right hand and wrist amputated after he was injured by an improvised explosive device in Afghanistan’s Helmand province in July 2012. He also lost partial vision in his left eye from the explosion. Even though his hand is missing he can still feel it, often referred to as a “phantom limb.”

“I started noticing after about the third or fourth session, my phantom limb pain would go away. Or it would ease up just from doing yoga, from just not thinking about anything,” he says.

Here is a true example of  strength and courageous, of going beyond expectations and making your own reality. When you do yoga let this serve to inspire you that everything is possible if you have te courage to explore.

Courage to explore and KINDNESS! Read back over this article – if in doubt… These vetrans are not pushing and shoving and striving to go beyond. They are practicing a true yoga of self kindess. They are going their own rate and feeling every moment. This allows them to practice safely, be in the moment, deepen their practice and expand beyond their expectations. Through this perceptions change, pain changes and barriers change. Not because they are forced to, but through self kindness they dissolve. This is true yoga.

The Adaptive Yoga class is part of the Exalted Warrior program that started in 2006 and works with Yoga for Vets, a national program that offers veterans free yoga classes in their hometowns. For more information see: